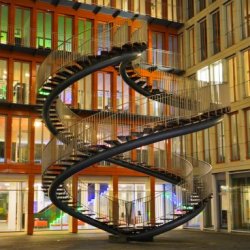 July 2020. One of few guests at Teufelsberg, Berlin.
Unfortunately tower is closed, but trip isn’t wasted.
Not at all. This place is an oasis and a must-see for fans.

What is it? A man made mountain, a ruin and artwork.
Should you go? Yes, you should.

Teufelsberg is the highest point in West Berlin with 120,1 metres (394 ft) high, higher than the former highest point Großer Müggelberg, cf. Müggelberge. As in the whole of Grunewald Forest, wild boar frequently roam the hill. There are hundreds of these – and one was spotted crossing the street.

A man-made mini-mountain of WWII rubble. In a very green, almost tropical area.

Graffiti, murals and street art all over the place.

Spent a couple of hours there, but could have spent at least half a day to see the small, medium, large and super large works of art. Some absolutely brilliant. World-class watching. A regular visit is 5 Euro, but guided tours are available on request. That may be recommended.

You can walk around the remnants of the former US cold war spy (listening) station. All the walls are covered with murals, graffiti and tags. Just walking around the main building, you will have plenty to discover and digest.

When in Berlin, do as the Berliners. Or maybe not?!
I want in, but pipe is wound with barbed wire: Stay out.

For the love of God … does anyone not like skull art?

You can also enter the halls (not possible on this visit) and the hallways, which aren’t lit, so you have to carry a torch or a smartphone.

In the surrounding areas the wood has started creeping in and is accompanied by garbage, DIY furniture and strange pieces of art.
If you venture off the path you will find an area with more graffiti.

Look carefully. Up, down and around. Into all nooks and crannies, because there is art – or something – everywhere.

Some works would do very nicely on Iron Maiden, Megadeth or DIO covers.

Most of it amazes you. Some of it gets to you.

Sam Worthington aka Wasp Elder (1986), UK, is a socially engaged artist whose aim is to paint murals that communicate with people. He often paints pictures populated by enigmatic figures and unstressed backgrounds, enticing a sentiment of an obscure journey. His paintings present an evocative combination of solitary figures, collaged scenes, close-ups, and obscured features. Through this working process he is able to present often marginalised figures through a dignified representation. Highlighting their humanity outside of the conflict that is seen to define them. His work is an attempt to echo how we filter information around us with the result being presented like a blurred memory or statement, not the statement its self (bio).

“Like in the rest of his work, Wasp Elder makes use of photography as a reference for his painting, a clear impression of reality that at some point gets left behind giving way to a change of focus towards the process of painting, making the image (memories) into something physical like a painting. It is in this process that memories and thoughts become blurred.”
Urbanite (Wasp Elder in Turku, Finland)

Graffiti (both singular and plural; the singular graffito is very rare in English except in archeology) is writing or drawings made on a wall or other surface, usually without permission and within public view. Graffiti ranges from simple written words to elaborate wall paintings, and has existed since ancient times, with examples dating back to ancient Egypt, ancient Greece, and the Roman Empire (Wikipedia).

Teufelsberg is a man-made hill, created in the 20 years following the Second World War by moving approximately 75 million m3 (98 million cu yd) of debris from Berlin.

After the Communist putsch in the city parliament of Greater Berlin (for all four sectors of Berlin) in September 1948, separate parliaments and magistrates (German: Magistrat von Groß-Berlin; city government) were formed for East and West Berlin. This also ended much of the cooperation between West Berlin and the state of Brandenburg, surrounding West Berlin in the North, West and South.

While part of the rubble from destroyed quarters in East Berlin was deposited outside the city boundary, all the debris from West Berlin had to be dumped within the western boundary. Due to the shortage of fuel in West Berlin, the rubble transport stopped during the Berlin Blockade.

Although there are many similar man-made rubble mounds in Germany (see Schuttberg) and other war-torn cities of Europe, Teufelsberg is unique in that the never completed Nazi military-technical college (Wehrtechnische Fakultät) designed by Albert Speer is buried beneath. The Allies tried using explosives to demolish the school, but it was so sturdy that covering it with debris turned out to be easier. In June 1950 the West Berlin Magistrate decided to open a new rubble disposal on that site. The disposal was planned for 12 million m3 (16 million cu yd).

With the end of material shortages after the blockade, an average of 600 trucks deposited 6,800 m3 (8,900 cu yd) of material daily. On 14 November 1957, the ten millionth cubic metre arrived. The site was closed to dumping in 1972, leaving approximately 26 million cubic metres (34 million cubic yards) of debris, and to a lesser extent construction waste. The Senate of (West) Berlin opted to plant greenery on the hill as a beautification project.

Teufelsberg has been a location for several recent movies and television programmes, such as The Gamblers, Covert Affairs (second-season episode titled “Uberlin”) and We Are the Night in which the finale takes place on Teufelsberg. 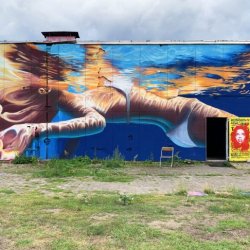 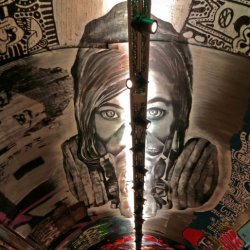 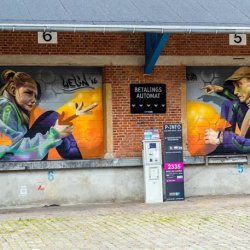 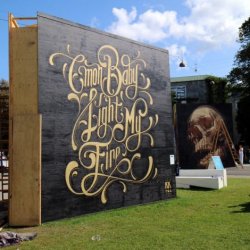 Aarhus Streetart Festival 2017: Grisk Graffiti is in the Street!... 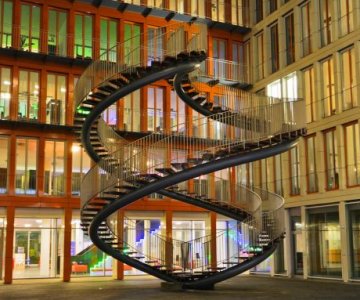